Answer: Nothing like as much as they used to!

From 1987 to 1999 hedging strategies were a key financial component for most gold mining companies. Hedging was originally a way to manage risk. It enabled miners to secure credit and protect revenues from falling gold prices. 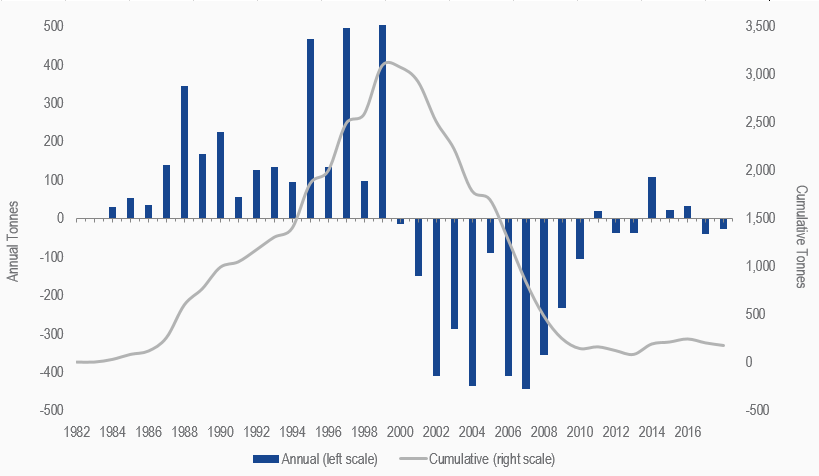 However, hedging became excessive from 1995 to 1999 as companies increasingly used it as a way to speculate on the gold price and, as is usually the way, a crash soon followed. A spike in the gold price forced Ashanti Goldfields (which had built a gold hedge book totaling 11 million ounces) into effective bankruptcy and scared the living daylights out of every gold company CFO with a hedge book. This resulted in the huge decline in hedging from 1999 to 2000.

The secular bear market for gold ended in 2001, when a secular gold bull market was heralded in by the dotcom bust and subsequent decline in the U.S. dollar. Fearing a continued rise in gold prices, by 2010 companies had bought back virtually all of their underwater hedges (struck at low gold prices in the ‘90s), at great expense to shareholders. Thereafter, the low levels of hedging shown on the chart since 2010 are again aimed at risk control.

Joe Foster has been Portfolio Manager for the VanEck International Investors Gold Fund since 1998 and the VanEck – Global Gold UCITS Fund since 2012. Mr. Foster, an acknowledged authority on gold, has over 10 years of dedicated experience in geology and mining including as a gold geologist in Nevada. He has appeared in The Wall Street Journal, Barron's, and on Reuters, CNBC and Bloomberg TV. Mr. Foster has also published articles in a number of mining journals, including Mining Engineering and Geological Society of Nevada.