Put at its most simplistic, for every rig by which the rig count in the U.S. declines, that’s one fewer rig generating revenues for its owner. Almost every rig in the U.S. is owned by an oil services company. The U.S. combined oil and gas rig count is down nearly 70% from its 2014 peak. Thus, it is, perhaps, no wonder that these companies are currently having such a hard time.

This huge overcapacity of equipment will not dissipate soon. Unlike oil, gas and other mineral reserves dug up out of the ground, this equipment is not a depleting asset that is produced, consumed and then disappears. The assets of oil services companies are built for longevity. For example, oil rigs, whether offshore or onshore, are built to last. Sometimes they can have a useful life of 20 to 40 years.

Thus, while a moderate improvement in oil and gas prices may have a positive impact on exploration and production (E&P) companies, the overcapacity in rigs and other oil field equipment could overhang the oil services industry for quite some time. 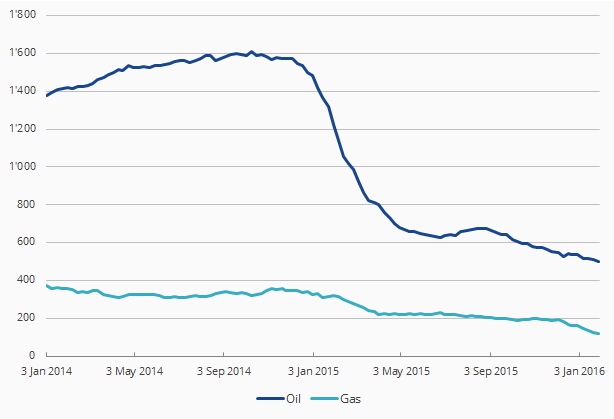 About the Author:
Mr. Reynolds joined VanEck in 2005 as senior analyst focusing on energy, and currently serves as co-portfolio manager of Van Eck's natural resources strategies. Prior to joining Van Eck, he was employed at Petrie Parkman & Co. as an energy analyst covering U.S. oil and gas exploration and production companies. From 1991 to 2001, Mr. Reynolds covered North American, European and global energy companies out of New York, Australia and London with Goldman Sachs, Lehman Brothers, and Credit Suisse First Boston. Prior to his career in finance, Mr. Reynolds worked at Tenneco Oil Company from 1987 to 1989 as an exploration geologist.

Mr. Reynolds received a bachelor's degree in engineering from Cornell University in 1985, a master's degree in petroleum geology from the University of Texas, Austin in 1987 (Phi Kappa Phi), and an MBA in finance from the Columbia Business School in 1991 (Beta Gamma Sigma). In 2000, he was chosen as The Wall Street Journal's «Best on the Street» for E&P stock selection, and was recognized as «Best Up and Comer», E&P Sector, for Institutional Investor magazine's 1999 All-America Research Poll. Mr. Reynolds has also authored several technical geology articles published in periodicals such as the American Association of Petroleum Geologists.