U.S. Rig Count Only Creeps Up

Some oil services companies’ share prices may have been enjoying upticks in October, but these are more likely the result of slightly healthier oil prices than anything else.

Over the last two years, from its peak at the end of September 2014, the U.S. combined oil and gas rig count has fallen by 1,409, or nearly 73%. Since almost every rig in the U.S. is owned by an oil services company, it remains no wonder that they are currently having such a hard time.

Any talk of a “rebound” in the rig count and an upsurge in shale oil production really should be taken with a pinch of salt. The uptick of 120 in the count between the ends of May and September this year accounts for only some 8.5% of the total number of rigs taken out of services in the past couple of years.

This hardly constitutes a rebound. Nor does it presage any upsurge in unconventional oil supply. The rig count is, indeed, creeping up, but that’s it. 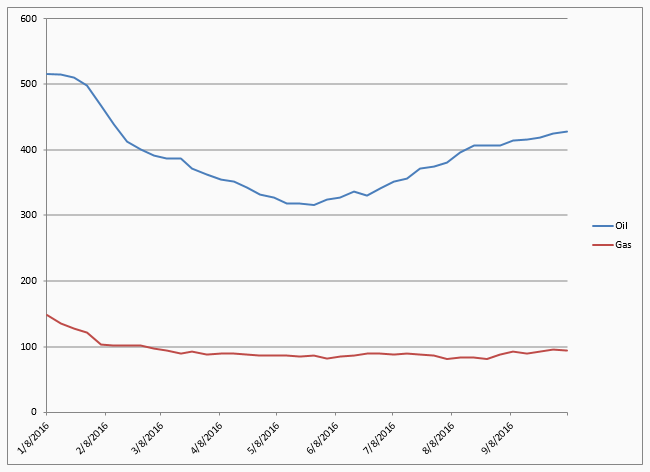 About the Author:
Mr. Reynolds joined VanEck in 2005 as senior analyst focusing on energy, and currently serves as portfolio manager of VanEck's natural resources strategies. Prior to joining VanEck, he was employed at Petrie Parkman & Co. as an energy analyst covering U.S. oil and gas exploration and production companies. From 1991 to 2001, Mr. Reynolds covered North American, European and global energy companies out of New York, Australia and London with Goldman Sachs, Lehman Brothers, and Credit Suisse First Boston. Prior to his career in finance, Mr. Reynolds worked at Tenneco Oil Company from 1987 to 1989 as an exploration geologist.

Mr. Reynolds received a bachelor's degree in engineering from Cornell University in 1985, a master's degree in petroleum geology from the University of Texas, Austin in 1987 (Phi Kappa Phi), and an MBA in finance from the Columbia Business School in 1991 (Beta Gamma Sigma). In 2000, he was chosen as The Wall Street Journal's «Best on the Street» for E&P stock selection, and was recognized as «Best Up and Comer», E&P Sector, for Institutional Investor magazine's 1999 All-America Research Poll. Mr. Reynolds has also authored several technical geology articles published in periodicals such as the American Association of Petroleum Geologists.