What Israel-UAE Normalisation Means for Investors

The historic announcement in mid-August of normalisation of relations between the United Arab Emirates and Israel ignited a surge of excitement in the two countries, bringing years of covert business and security ties between Israel and in the UAE into the open.

The initial diplomatic breakthrough was followed on August 29 with a formal decree by the president of the United Arab Emirates Khalifa bin Zayed Al Nahyan scrapping a five decades-old economic boycott against Israel. This enables trade and financial agreements between the countries as part of “the UAE’s efforts to expand diplomatic and commercial cooperation with Israel, leading to bilateral relations by stimulating economic growth and promoting technological innovation.”1

The decree means UAE citizens and businesses will be free to do business with—and invest in—Israel, and to forge partnership with Israeli companies regarding opportunities in the UAE and beyond.

Furthermore, we believe there will be significant impact in bilateral trade, direct investment in infrastructure, cooperation in science, agriculture, water, energy and tourism. Communications and financial transactions are also expected to be easier now that the UAE has opened its phone lines to Israel, stopped blocking access to Israeli websites, and established SWIFT connectivity for direct payments. The accord between the countries will also include direct flights, with approval from Saudi Arabia to use its airspace granted on September 2.

With comprehensive bilateral trade and investment agreements expected to be signed by the end of September, Israel’s Finance Ministry now sees potential for annual trade with the UAE quickly growing to $2B/year, and surging to $6.5B once cooperation matures.2

Israel is one of the world leaders in AgriTech, WaterTech and FoodTech, all of which may be easily deployed in the UAE, given its similar environmental challenges. Israel expects to develop joint ventures that can help improve the oil-rich Gulf nation’s food security, such as water desalination and crop cultivation in the desert. There is also potential UAE direct investment in Israeli energy fields in the Mediterranean. This may also result in a “re-rating” of the value of Israel’s energy assets, a process started by Chevron’s acquisition of Noble Energy this past summer.

We believe the appeal of Israel’s tech ecosystem—commonly referred to as "Start-Up Nation"—to contribute to the diversification of Gulf economies may now be even more irresistible to UAE investors, entrepreneurs and innovators. Early-stage Israeli firms, as well venture capital and private equity funds focused on Israeli tech will surely be major beneficiaries in our view. The most dynamic parts of Israel’s innovation ecosystem consist of AgriTech, BioTech and Medical Devices, CyberSecurity and DefenseTech, all of which are highly relevant to the UAE’s economy, as well as the energy and infrastructure opportunities. In fact, several leading Israeli cybersecurity and defense companies are known to have quietly conducted business with the UAE and other Gulf Arab countries in the past few years, but now the relationships will become more open and grow strongly.

In closing, we believe that the normalization of relations with the UAE will possibly benefit almost all aspects of the Israeli economy, even before the “knock on effects” of deeper ties with other Arab states like Oman, Bahrain and especially with Saudi Arabia. And while the initial deals are likely to focus on direct investment in infrastructure and joint ventures in AgriTech and biotech, we believe the biggest potential windfall will be the flow of investment into Israel’s capital markets, a positive shift that may reverberate for years to come. 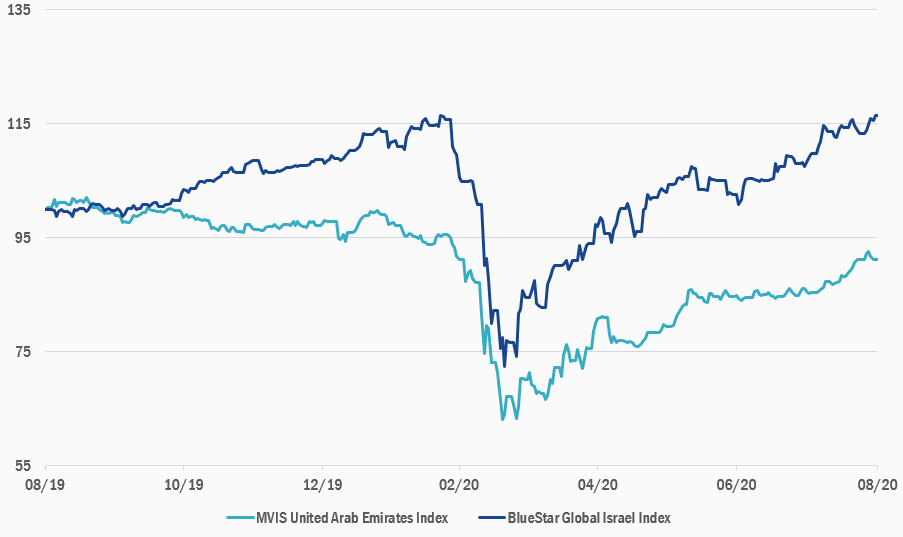 
Steven Schoenfeld joined MVIS as CEO following its acquisition of BlueStar Indexes in August of 2020. Steven was the Founder and Chief Investment Officer of BlueStar which maintained a family of indexes for Global Technology Stocks and Israeli Equities & Bonds. Steven is a 36-year veteran of the investment management industry, having served in senior fiduciary positions at Northern Trust, where he oversaw more $300 billion in quantitatively-managed global equity and fixed income portfolios, and at Barclays Global Investors (now Blackrock), where he managed more than $70 billion in developed and emerging market stock index fund and ETFs. Previously, he led the team at IFC/World Bank which developed the first investable Emerging Market indexes, and traded Japanese stock index futures on the floor of the Singapore Exchange.
Steven is the author of Active Index Investing (Wiley Finance, 2004), co-author of The Pacific-Rim Futures and Options Markets (McGraw-Hill, 1992), and co-founder of IndexUniverse.com (now ETF.com). He has a BA in History and Government from Clark University, was a Fulbright Scholar in Economics at the National University of Singapore, and has an MA from the Johns Hopkins School of Advanced International Studies (SAIS).